Simple gestures have their roots in ancient knowledge

The first traces of the Chiacchiere date back to the times of the ancient Roman Empire. In fact, during the pre-Lent period, it was a tradition to prepare a large amount of sweets to distribute to the people: they were called Frictilia and they had to be “tasty”, easy to prepare and cheap. That’s why they consisted in simple and easy-to-find ingredients such as water, flour, eggs, then were finally fried in pork fat (lard) because it was very cheap and at the same time gave an intense flavor. The Frictilia, were cooked in large quantities because they had to be kept throughout Lent, and it was the lard that ensured their preservation.
As the Roman Empire extended almost throughout Italy, varieties of the original recipe developed in different regions, depending on the tastes and traditions of the various territories, starting from sweet or salted fried bread dough 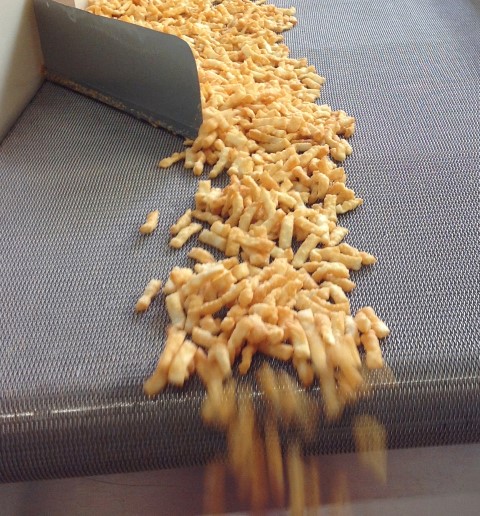 The Chiacchiera in recent times

At the beginning of the 20th century, the bakers of Modena, Bologna and Ferrara invented, from the old Frictilia recipe, a semi industrial product to be sold by weight, the Chiacchiere. This small product was made from the remaining bread dough, instead of throwing it away it was left to rise again until it reached 20 hours. At that point, the dough was worked to give it the shape of short and narrow noodles and then they were fried and sold by weight. From that moment on, the Chiacchiera were sold daily by the bakers, always by weight.

As time passed, the bakeries passed the recipe from hand to hand and generation to generation, risking to lose the originality and presence of the product on the territory. This happened until the brothers Walther and Leo Carmonini, in the 1960s, acquired from a baker in Ferrara the original recipe for the Salted Chiacchiere, saving a tradition that risked to disappear.

The origin of the name

The housewives, during holidays, after having lunch at home with friends and relatives, offered the chiacchiere together with good wine as an afternoon snack during card games. Here there were no discussions only Chiacchiere (Chattering)

An Emiliano-Romagnolo tradition rooted in Dozza, one of the hundred most beautiful medieval villages in Italy.
The village is situated on the ridge of a hill and it’s like an open-air museum where nature, art and food blend in perfect harmony. You can see the Sforzesca fortress, the seat of the regional wine shop and the painted walls of the houses made by famous contemporary art artists.
It is in this land of culture, of food and wine traditions that the Carmonini brothers continue to keep alive the original recipe of the ancient product: the salted Chiacchiere.

Manage Cookie
This website uses cookies, including third-party cookies, to guarantee you the best experience on our website, analyse traffic to this website and provide you with social media features. You can change your preferences at any time by accessing the cookie settings. By clicking the X to close the banner, only technical cookies will be kept.
Manage options Manage services Manage vendors Read more about these purposes
Preferences
{title} {title} {title}